Faithful Shepherding In The Midst Of Suffering – Part 2

In the first part, we briefly surveyed the reality of suffering because of various causes, and we concluded by saying that as pastors, our responsibility is to prepare our people both by our teaching, and by modeling the things that we teach. In this part, we will look at truths which we should know and hold to as we prepare for and face suffering.

First of all, Christians should never be surprised by suffering, problems or persecution. From the very beginning of the Bible, as early as Genesis 3:14-19, we are told that as a result of an Adam and Eve sin, a curse was placed upon this earth, it is real, and it touches everything we do. A friend of mine always says, “The fingerprint of the curse is upon everything.” It is! It is upon our marriages, our health, our minds, the work of the Lord: it touches everything. This is a fallen, broken, cursed world. And we should never be surprised by problems or by suffering. We should see it as just a normal part of the Christian life. In fact, that is when the Christian life shines its best. When we face suffering, by being faithful as those young girls in Nigeria say, in the midst of suffering.

John 16:33 is a verse that comes to my mind many times, “Jesus said, ‘In this world, you will have trouble but take hard for I’ve overcome the world.’” So our Lord Himself said, you will have tribulations in this world. And then we have some other very, very important verses. We have 1 Peter 4:12, “Beloved, do not be surprised at the fiery trial when it comes upon you to test you, as though something strange were happening to you.” Now, there is nothing strange happening. This is what it is like living in the fallen world, and especially being a Christian. We face even worse suffering and trouble. And then James 1, “Count all joy, my brothers, when you meet trials of various kinds, for you know that the testing of your faith produces steadfastness. And let steadfastness have its full effect, that you may be perfect and complete, lacking nothing.” And then a very important verse is 1 Thessalonians 3: 3-4, “You should know this well. But no one Let no one be moved by these afflictions. For you, yourself, know that we were destined for this, for when we were with you, we kept telling you beforehand, that we were to suffer affliction, just as it has come to pass, just as you know.” Then in Acts 14:22, Paul speaking to the very first Christians on the very first missionary journey, says, “Through many tribulations, we must enter the kingdom of God.” And 2 Timothy 3:12, “Indeed, all who desire to live a godly life in Christ Jesus will be persecuted.” So we are destined for trials, suffering, etc. The Lord has given us ample warning. And this is why we as leaders need to prepare the people by telling them what Jesus said, and what Paul said, what James said, what Peter said. Many people do not know these great statements or the promises, and the rewards that come which we’ll look at in just a little while.

I am reminded of a very close friend of mine. We were young, and he just got out of Bible school. He went to the mission field, and he was going to be a great missionary, because he had every gift. And on the way to the mission field, he landed in Africa. And while he was driving to the mission station, their truck went off the bridge and he died. What was that about?! Here is a very fine, young, new missionary, and he dies before he even gets to the field. That’s not uncommon. It is not uncommon to lose people whom we pray that God will raise up, and then they die young.

Well, I just want to tell you, the world is abnormal. The world is under a curse, we are in an enemy occupied territory. Why not us? Let us not be naive, and surprised by heartache and losses and troubles. In fact, if anything, it should cause us to pray and cause us to get on our knees and humble ourselves before God, knowing that this is not a pleasant world to live in.

Second, we need to continually teach our people that we are in a state of spiritual warfare. My friends, we are in a war zone and when you are in a war zone, you cannot go to sleep. You cannot be preoccupied with other things, or you will be seriously hurt. Let me read to you a great passage of Scripture that you should all know and know very well. Ephesians 6: “That you may be able to stand against the schemes of the devil.” In other words, he is a schemer. He has got plans for you. And he is always trying to attack us. We do not wrestle against flesh and blood, but against rulers, against authorities, against cosmic powers over this present darkness. We live in a very spiritually dark world. We are up against spiritual forces of evil in the heavenly places. Those are some very serious words. In fact, we should never get tired of going over this Ephesians 6 passage, because we are told to put on the full armour of God. And after you’ve put on the full armour of God in verses 18 to 20, you are to be a person of prayer because it’s a serious situation that we are in.

We had a young man in our church, and he went to Iraq as a soldier. And he told me, they would go out on these missions in which you could not close your eyes, you could not sleep, or even just have a regular conversation. You had to be watchful every second. And one day he came back from one of his missions, and when he looked at his shirt, there were bullet holes, right through his shirt! It did not hit him, he did not even feel it come through. But you have to be watchful because the enemy is trying to kill you. He hates you bitterly, and so we need to remind our people that Satan instigates persecution and many of these deep trials that we have.

Back in 1990, I went through a very, very severe trial myself, and it was really very severe. I lost my voice. For a preacher, that is about as severe as it can get. I lost my voice for an entire year. And then it took the next four years to get it back very, very slowly. And in one sense, it has never been the same. But during that year, (when I had no voice, I literally had to whistle to get people’s attention and write everything out) the Book of Job became very, very important to me. I read it over and over, and I read commentaries on it. In the book of Job Satan challenged God about Job. And God gave Satan a long rope, not a total rope, but a long rope to persecute Job. Because of terrible suffering in his life, Job, like those girls in Nigeria suffering under Boko Haram, was faithful. He did not curse God and die.

So books like Job are meant to encourage us during this time of suffering. It is interesting, that it may very well be that the book of Job is the very first book in the Bible written, and is certainly one of the very earliest ones. And what we have here is the whole issue of suffering, and what we get is the back curtain of suffering. Job never saw this, that Satan was challenging God about Job and Satan was making accusations against Job. And he said, “Well, Job serves you all because you treat him good, take away his property, take away his health, and he’ll curse you.” So God allowed that challenge. Incidentally, something similar, like that happened to Peter, Satan wanted to sift Peter. So in the book of Job we see behind the scenes, we do not see this in other places. But we do see it in Ephesians 6. There is this heavenly drama that goes on. Well, we need to teach our people that there is a spiritual war, which is as real as the ground I’m standing on. There is a heavenly force. There is an eternal battle, which will be ended by the Lord Jesus Christ Himself, when he destroys Satan just by the word of his mouth, and he will be condemned with all his followers, to the lake of fire, never again to bother God’s creation.

With the clear understanding that suffering is normal in our world, and that we are engaged in spiritual warfare, we will turn to the divine perspective on suffering in the next (and final) part of this series.

This article is the second one of the three-part article series of the transcript of Session 2 preached by Brother Alexander Strauch in the AIPC 2021 Online Conference held on Sep 17-19, 2021.
Please click here to view the sermon. 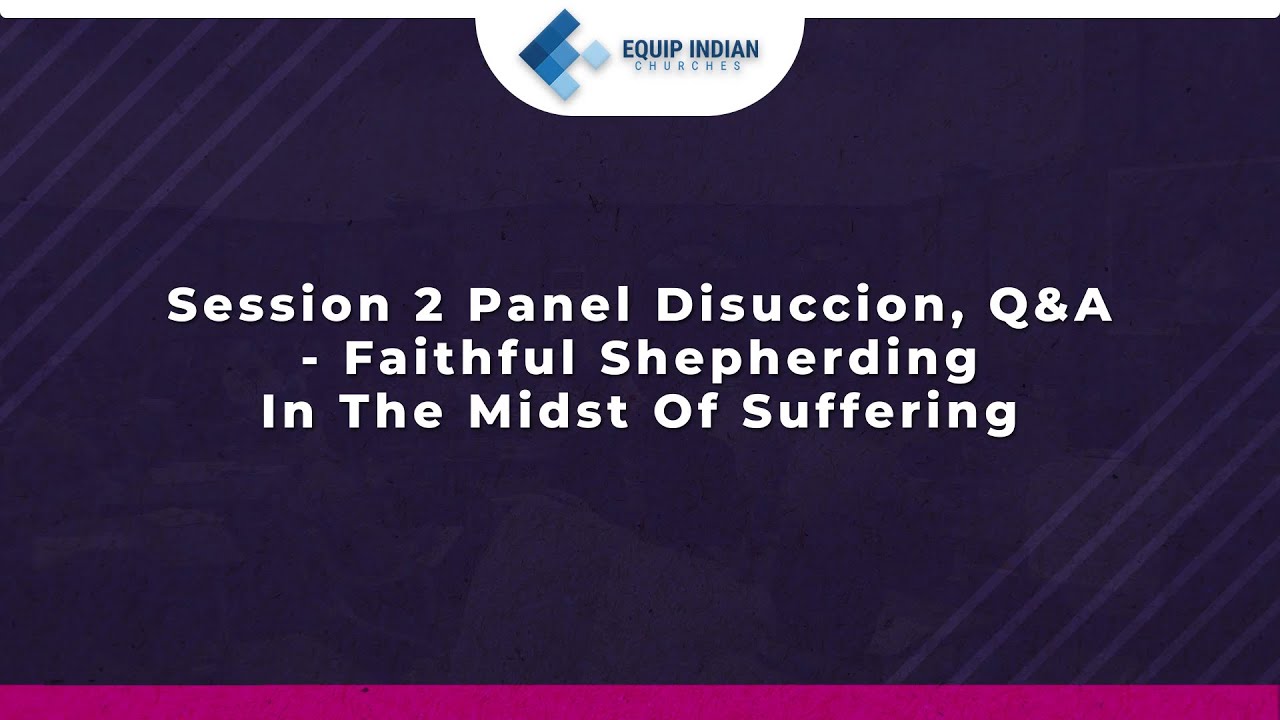 has served as an elder at Littleton Bible Chapel near Denver, Colorado for over forty years.

Faithful Shepherding In The Midst Of Suffering – Part 1