Review of Missions by Andy Johnson 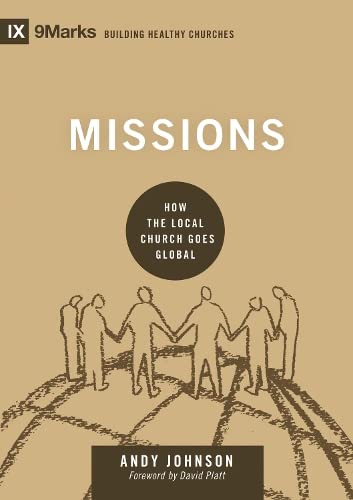 If one were to ask, “What is the mission of the church?”, it would certainly provoke a wide variety of answers that ranges from seeing everything a Christian does as ‘missions’ to seeing nothing but growing one’s own congregation as ‘missions.’ Therefore, to aid Christians and churches to think biblically about the ‘mission’ of the church, Andy Johnson’s book simply titled “Missions” (with the subtitle: “How the Local Church Goes Global”) serves as an excellent introduction. It is truly a small book (just 120 pages, booklet size!) that can easily be finished over a weekend. But, bringing the content of the book to life in the church would be a long-term endeavour since the book is packed with biblical insights on how a local church can effectively fulfil the mission entrusted by God to them.

Andy Johnson writes with simplicity. He does not write in abstract such that the reader is bogged by technical, missiological terminology and theories. Any Christian reading this book would greatly profit both in being able to understand with ease what missions is and how the church carries it out.

It can also easily be observed that the content of the book is thoroughly scriptural. Andy Johnson states his premise explicitly that “God’s Word gives us everything we need to know to obey him and bring him glory,” especially in fulfilling the Great Commission given by Jesus.1 And this is repeatedly vindicated in the book. Right from explaining what is the mission of the church, how the mission is carried out, what kind of missionaries and how they ought to be supported by the church, and what the goal of missions is, all of it is grounded in the truths of Scripture. Thus, the reader can see for themselves how the biblical truths shape and guide the work of missions.

Another key emphasis of the book is the centrality of the local church in the work of missions. Johnson notes that a church’s passion for missions does not stem from a passion for missions. Christians and churches are mistaken in thinking that a desire and a vision for missions is stoked by talking about the need or demographics of a place, or maybe even guilt-tripping people into doing ‘something’ for the Lord who has saved them. On the contrary, he writes that “The heart for God-glorifying missions starts with joy in the gospel. Our churches must first cherish the God who sent his own son to save sinners like us.”2 In other words, no Christian will be excited about missions if they first and foremost are not joyfully resting in the very foundation of what has gathered them as a church – the finished work of Jesus Christ.

In light of this, the vital role of the church is seen in how the term ‘missions’ is defined: referring not to anything and everything that a Christian might do, but primarily to the work of the church in fulfilling the Great Commission (Matt 28:19-20); and, similarly, the term ‘missionary’ refers not to any renegade Christian but rather, it refers to someone who is “identified and sent out by local churches to make the gospel known and to gather, serve, and strengthen local churches across ethnic, linguistic, or geographic divides.”3

The centrality of the local church is also seen in the way Johnson writes about the relationship between churches and missionaries. Drawing from 3 John 1-8, he highlights the important role of the whole church in choosing, training, and sending missionaries without delegating it to some mission agency. Though he does acknowledge the value and benefits of a sending agency, he writes that the final responsibility squarely falls on the local church and it is they who continue to care for and support the missionary in their long-term work.

One of the merits of this book is that the ideas of the book since they are biblical, are replicable. Johnson does not write from the perspective of what has worked for him or his church, or what can be emulated only by the affluent, urban churches. On the contrary, any church, anywhere can easily adopt the truths of this book and begin engaging themselves in missions. Thus, the ideas of the book are largely universal in its scope. In fact, in the final chapter, Johnson even touches upon how a local church can be involved in global missions in ways that don’t require individual Christians to be “full-time” missionaries.

But what I, perhaps, most loved about the book is that it is unashamedly God-centered. In the very first chapter, Johnson notes that “the mission belongs to God, for his glory, on his terms.”4 And the rest of the book attests to this in the repeated emphasis that missions is less about what the church does in order to be a church and more about what God is doing through the church in glorifying Himself among the nations. Certainly, other areas relevant to missions could have been touched upon or discussed with a little more detail such as local missions, partnering with other local churches in the work of missions, and the role of women missionaries, among other things. However, given the purpose and size of the book, these are but minor shortcomings that can be easily overlooked and addressed by other books on missions.

I would highly commend this book to be read by all Christians, especially by those in the leadership of the church to consider not merely integrating missions as another ministry of the church but to raise it to be central to the life of the church. Likewise, this book would be a good addition to training potential church leaders and church planters in thinking through how their work is not an end-all to ministry but a means to further the work of God in the world.

*This book can be purchased here.