Thinking of work reminds me of a conversation that I had a while back with a pastor. Years ago, when I met him one Sunday, he asked me, “How is your work?” With a deep sigh, I said, “I have a lot of work to do and I am becoming very busy”. To that, he replied, “It is a blessing and it is good to be busy.” That sounded crazy to me then. But is that how the Bible looks at hard work? What do we see about toil in the Bible? Let us consider the example of the Apostle Paul and learn lessons about labouring in ministry.

LABOURING HARD
In his epistles, the Apostle Paul talks about his toil in ministry for the sake of the Lord Jesus. He uses two different Greek words in the Epistles for toiling. One is ‘κόπος’ (kopos) which means labour, trouble or weariness which carries the connotation of painfulness. The other word is ‘μόχθος’ (mochthos) meaning painfulness or travail which carries the connotation of sadness.

Writing to the Corinthian church he says, “For I am the least of the apostles, unworthy to be called an apostle, because I persecuted the church of God. But by the grace of God, I am what I am, and his grace toward me was not in vain. On the contrary, I worked harder than any of them, though it was not I, but the grace of God that is with me. Whether then it was I or they, so we preach and so you believed” (1 Cor. 15:9–11, emphasis added). The Apostle Paul in his life worked hard or rather harder than any other apostle to serve the church which he once tried to destroy. He acknowledges that this change in him was brought by God through His grace. This same grace, he said, was the reason behind his hard-working nature.

LABOURING WITH GOD’S POWER
It was not God’s grace alone that enabled him to work hard, but also the power of God that worked in him. In another epistle he says, “For this I toil, struggling with all his energy that he powerfully works within me” (Col. 1:29). In the context of this verse, we see that the Apostle worked hard for the church in Colossae. Through his preaching and teaching of God’s word to them, he worked to present them mature in Christ. ‘People work’ is hard work. Anyone who works with people knows that it is not easy to handle people’s different personalities and problems. It sounds much better to do a desk job in a company than to work with people with different attitudes. It really takes a lot of patience and hard work. Even for the Apostle Paul, there was no exception, so he had to work hard to achieve his goal. However, he did not say that by his own strength he worked hard. Rather, Paul said that all that he had accomplished was by the power of God working in him. It was God’s strength that enabled Paul to labour in God’s Kingdom.

LABOURING MORE
In 2 Corinthians 11:23-28, we can look at Paul’s resume of all his experiences. Boasting in the flesh, Paul sees himself as better than everyone. This is not because he had his “best life now”, but due to the terrible experiences in this life. There were dangers everywhere he went whether land or sea. He was beaten many times and once had a near death experience. He suffered both internal and external pressure in his life on a daily basis. He truly laboured in life. It would really be hard for us to be in his shoes.

LABOURING PURPOSEFULLY
With a sympathetic heart, we may ask, “Why did he have to endure all these things?” To that Paul would reply, “For you remember, brothers, our labour and toil: we worked night and day, that we might not be a burden to any of you, while we proclaimed to you the gospel of God” (1 Thess. 2:9). Paul worked hard night and day to support himself while he was at Thessalonica. Though as an apostle, he could have rightly and lawfully earned through his ministry. Yet, he chose not to be a burden to the Thessalonians and to be an example to some as well.

Was it really God’s will for him to endure that painful, sorrowful labour? Speaking about Paul to Ananias, Jesus said to him, “Go, for he is a chosen instrument of mine to carry my name before the Gentiles and kings and the children of Israel. For I will show him how much he must suffer for the sake of my name” (Acts 9:15-16 emphasis added). For reasons we might not know, Jesus ordained for Paul to endure laborious work and suffering. In order that through Paul, Christ might show His strength and hope to this suffering and sinful world. How did the Apostle Paul endure all this toil? What gave him the motivation to carry on?

LABOURING HOPEFULLY
Writing to his beloved associate Timothy and reminding him of the work of ministry, he says, “For to this end we toil and strive, because we have our hope set on the living God, who is the Savior of all people, especially of those who believe” (1 Timothy 4:10). Paul worked hard because he had hoped in God. His experience and response to all his toils are unlike Solomon’s who said: “Then I considered all that my hands had done and the toil I had expended in doing it, and behold, all was vanity and a striving after wind, and there was nothing to be gained under the sun” (Eccl. 2:11).

Hope in God and the hope of redemption in Christ gave meaning to the laborious work that Paul endured. For he toiled in the kingdom of God by spreading the seed of the gospel all over the world. By the sheer grace of God, he hoped that he would receive the reward in eternity. It is this hope that gave him the motivation to work harder than anyone else. But, how did the Apostle Paul respond to all this toil?

LABOURING JOYFULLY
The way he responded to all the hard labour amazes me all the time. Paul said, “Now I rejoice in my sufferings for your sake, and in my flesh, I am filling up what is lacking in Christ’s afflictions for the sake of his body, that is, the church…” (Col. 1:24). Rejoicing in suffering! I think this paradox can only be found in Christianity. In death, we find life. In suffering, we find comfort. In pain, we find joy – all from God. All of this is because of Christ Jesus who endured pain, suffered and died on the cross of us. Therefore, we who deserve death might have a contrary experience throughout eternity. Although, we might have to endure some pain and suffering in this world. These sufferings are temporary and useful for us to stay away from the sinful comforts of this world and to display the gospel in and through our lives. Truly it is a blessing!

Dear brothers in ministry, let us joyfully and purposefully toil and labour more in the ministry that God gave us with his strength. For we have hope as we await a Savior who will reward us in eternity! 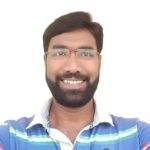