What Is So Nice About The Nicene Creed? 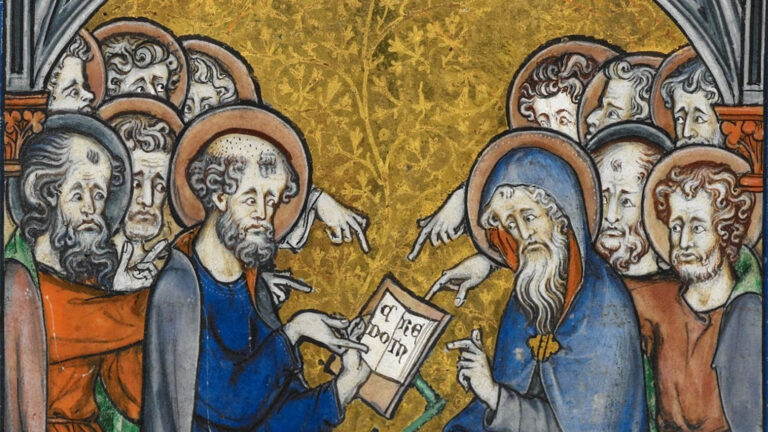 We all love Christmas carols because of their catchy tunes and how they bring us into some kind of a festive mood. But I wonder in all the hustle and bustle of our Christmas season whether most of us pay careful attention to the lyrics of these beloved carols? For example, if we consider the famous carol “O Come Let Us Adore Him”

Verse two of this song says-

True God, of true God,
Light from Light Eternal,
lo, he shuns not the Virgin’s womb;
Son of the Father,
begotten, not created.

This stanza alone is loaded with so much truth and history that we can meditate on it all through the Christmas season and truly be edified! But one might ask “What inspired such profound words?” Who has time to so carefully and precisely formulate such sweet and true statements? Thankfully we have the answer. You may be surprised to know that this stanza was inspired by a Council of Bishops that met nearly 1700 years ago! In the year AD 325, there was an Emperor-sanctioned council meeting of 320 Bishops of churches spread throughout the Roman Empire that was assembled at Nicea. It was here that a massive theological battle was fought and we are still reaping the benefits of this Council’s conclusion.

But Why Exactly Did Emperor Constantine Have To Call Together This Council?
There were some political reasons behind Emperor Constantine to assemble such a council. After all, he had kind of embraced Christianity and given it complete freedom. He wanted to unite all the different churches in order to strengthen his kingdom. However, there was another major reason for such a council. We can say the reason was another “jingle” that had become popular by a Bishop called “Arius”. Many people began to sing the jingle which said “There was a time that the Son was not”. Arius wanted to systematize Christian teaching but sadly he came to some potentially deadly conclusions on who Christ is in relation to the Father. His reasoning was that because the Father is the Self-existent eternal one and because the Son is called the “firstborn” and “begotten”, then logically speaking “there was a time when the Son was not.” Arius did say that the Son is a glorious being having great attributes worthy of adoration, but he also said that the Son is not co-eternal, and co-substantial (of one nature) with the Father.

Even today we have well-educated and well-dressed people called “the Jehovah’s Witnesses” who come to our homes and say essentially what Arius said. They say that Jesus is great and wonderful but He is “a god” and that He is the first great creation of Jehovah. We are called to fight the good fight of faith against such a grave error. There are some people who say why debate and worry about finer issues of doctrine because doctrine divides. We can say such things concerning some peripheral issues, but the issue in AD 325 was about life or death and heaven and Hell.

This is because if we get the deity of Christ wrong then we have no reason to have to be certain that Christ actually bore all our sins and endured the wrath of God and truly finished the work of our salvation. If Christ is in any way less than God, He could not truly survive the wrath of God!  Furthermore, such wrong thinking inevitably would rob our Lord of our true worship and adoration. It would undermine the very power of the gospel to save and transform sinners. But Praise God that Athanasius, a deacon serving under the Bishop of Alexandria, saw what was at stake, and by God’s grace he took a stand against this heresy even at the expense of banishment. The faithful fight of Athanasius did not go in vain as almost the whole council almost unanimously returned to the right belief of the Deity of Christ.

What Was The Creedal Confession That The Bishops Agreed Upon?

Concerning God The Father
We believe in one God,
the Father almighty,
maker of heaven and earth,
of all things visible and invisible;

In the first part of the Creed, the entire focus is on God the Father. But it is noteworthy that the Nicene creed very plainly states that there is “One” God and yet goes on to tell us that the “One” God exists eternally as Father, Son, and the Holy Spirit. Here we begin to enter the wonderful mystery of the Trinity which we can understand to some extent from our earthly perspective, but which contains such a profound mystery that the most brilliant of scholars have to say that they cannot fully explain it.

Concerning God The Son
And in one Lord, Jesus Christ,
the only begotten Son of God,
begotten from the Father before all ages,
light from light,
true God from true God,
begotten not made,
of one substance with the Father,
through Whom all things came into existence,
Who because of us men and because of our salvation came down from the heavens,
and was incarnate from the Holy Spirit and the Virgin Mary
and became man,
and was crucified for us under Pontius Pilate,
and suffered and was buried,
and rose again on the third day according to the Scriptures
and ascended to heaven, and sits on the right hand of the Father,
and will come again with glory to judge living and dead,
of Whose kingdom there will be no end;

In the second and central section of the Creed, we see that a lot of time is spent on defining and explaining the true sense of who our Lord Jesus Christ is in relationship to the Father. The creed uses plainly Biblical language when it says “only begotten.” This word in the original Greek text of the Nicene creed is the word “monogenes” which reminds us that Jesus Christ is the unique and “one of a kind” Son of the Father. We are sons of God by adoption and we remain as created beings, but Jesus Christ is uncreated and was in the bosom of the Father (Jn. 1:18) from all eternity.

One of the most important lines to understand the stand against the Arian controversy is to see how the creed clearly says “begotten from the Father before all ages” Arius had put Christ as the first great creation of God and was thinking of a time sequence but here we are called to Biblical orthodoxy which tells us that before time and before anything of creation was ever made Jesus was eternally God. If “all things through Christ have come into existence” then clearly Christ is not part of Creation but He is Creator. If Jesus said in (John 8:58) that before Abraham was “I am,” then we ought to see even the “Today I have begotten you” of Psalm 2 as outside of time and space.

The creed could not be any clearer that Jesus is “one substance” with the Father. Jesus is not a first copy, not a copy that came a split second later but of the same essence (all that God truly is) of the Father. Now let this settle in and sink into our hearts. This Jesus was made for us and our salvation of no reputation and embraced the life of a humble covenant Servant and the death of a terrible criminal. Suddenly we again are struck with the wonder of the Incarnation, the substitution and the mediation of Christ. No wonder then that as soon as Christ said “It is finished” the Father let some dead saints rise up to show His victory. The Father tore the curtain from top to bottom because He was pleased with the work of His precious and co-equal Son.

Concerning God The Spirit, The Church And Our Great Hope!
And in the Holy Spirit, the Lord and life-giver,
Who proceeds from the Father,
Who with the Father and the Son is together worshipped and together glorified,
Who spoke through the prophets;
in one holy Catholic (universal) and apostolic Church.
We confess one baptism to the remission of sins;
we look forward to the resurrection of the dead and the life of the world to come. Amen

The last part of the Creed expands a little more than the Apostle’s Creed on the Life-giving and regenerating ministry of the Holy Spirit. As a life-giver and the Eternal Spirit who is a person and not a force, the Holy Spirit is worthy of worship and co-equal to the Father and the Son.

In Conclusion, we realise how important it is to understand the true sense of what various doctrines mean. On the crucial, non-negotiable doctrines we must not concede even an inch. How wonderful it would be to use these wonderful creeds then so that our churches will be well educated and even edified. How wonderful it would be if our children and teenagers were given a basic framework of our faith. How profitable it would be if new people who never grew up in the church could be taught the value and truths of this Creed. Let us be Bible people first but also let us give serious consideration to the faithful affirmations and definitions of those who have gone before us.

serves as the Pastor at Jeevant Asha Bible Church, Pune, Maharashtra. He is married to Sayia and they have three children.

The Prayer Of Jehoshaphat

I AM The Light Of The World

What Can Today’s Families Learn About The Importance Of Prayer?

“But He Was Pierced For Our Transgressions” Isaiah 53:5

The Law And The Gospel

The Pastor and Sermon Preparation – Part 3

The Pastor and Sermon Preparation – Part 2

The Pastor and Sermon Preparation – Part 1