Suffering And The Sovereignty Of God – Part 2

1. Suffering exists because of the fall. We read in Genesis 1 that God spoke the world into existence and the world that he created was good. Adam and Eve, our first parents, were created in God’s image, and they were placed in a particular context and given a specific commission. They were to trust God’s word, they were to enjoy his presence and fulfil his mandate by filling the earth with his glory through the multiplication of godly offspring. But we know how that went wrong, don’t we? Adam and Eve rebelled against God instead of trusting and obeying His word. As a result of their sin, they were judged by God and banished from his presence. God cursed the world so that it bore thorns and thistles making work incredibly hard and frustrating for the man and he made the process of childbearing for the woman agonisingly painful.

We live in a world that has been cursed by God. And while Jesus Christ has inaugurated the new creation in his blood, while we have been born again and given the gift of saving faith, we have been given the power of His Spirit to overcome sin. While all of that is true, let us not forget that this creation still groans. The new heavens and the new earth is not yet here in all its glory. We still do battle with our sin, and we still await the redemption of our bodies, we await the coming of our Lord Jesus Christ, and work is still frustrating. Mothers still experienced pain in labour rooms. Why should pastoral ministry be any different? You know, Jesus has accomplished what Adam failed to do. And he has called us in the Great Commission, not to make physical offspring, but spiritual offspring. And that’s going to involve hard labour.

The task of making disciples is hard work, and we live in a world that is not conducive to this task. In fact, it is opposed to this task. things don’t always go according to our plans to do that. And so, remember that in this age, disease, dilemmas, disappointments, dangers, and discomforts will remain our constant travelling companions.

2. Suffering exists because of sinners and because of the consequences of sin. You see, Scripture tells us that we are sinners by nature and by choice. David says in Psalm 51:5, Behold, I was brought forth in iniquity and in sin did my mother conceive me. Paul, quoting the Psalms says in Romans 3:10-12, none is righteous, no, not one. No one understands, no one seeks for God, all have turned aside, together, they have become worthless, no one does good, not even one. The sinfulness of the fallen man is demonstrated immediately, after the fall, when one brother murders another brother in the story of Cain and Abel in Genesis 4. And Genesis 6 tells us that the wickedness of man was so great that the thoughts of men’s hearts were only evil continually. And so, God judged the world with the flood because of that.

After the flood, we see that Noah’s son sins and he gets judged for it. The nations sin at Babel, and are judged by God as He confuses their languages and disperses them all over the earth. The fact that we have so many different languages, and the fact that we are dispersed and cannot understand each other is meant to function in the same way that every scream from the labour room is meant to function. It is not meant to teach us how awesome we are. No, it is meant to tell us how sinful we are, how short we have fallen of the glory of God. Communication has become hard. This makes missions hard. This makes church planting hard. This makes discipleship hard. The consistent testimony of the Scriptures is that we are helpless sinners, unless this God enters into our helpless state, and rescues us. And he has done exactly that in Jesus Christ our Saviour. Jesus is the fulfilment of all the promises of the Old Testament, and he is the hope of the Old Testament. Just reading the first two books of the old testament exposes us to murder, incest, lies, scandals, rapes, betrayals, thefts, political and social corruption. And yet we see that God was sovereign over them all, and that nothing could stop his redemptive purposes leading up to the coming of the Messiah. You need to remember that when circumstances seem overwhelming. In our day technological advancements and better education have only made us more sophisticated in our sin, and they have made our members more sophisticated in their sin.

Every pastor who loves his sheep knows that sometimes this task can be burdensome. It can be a mental and emotional drain on you so much so that it can affect your health. Watching over souls can sometimes be a joyous task. And sometimes it can make you groan. Do your members frustrate you? Do they hold you up to impossible standards? Have you been slandered by people you thought were your friends? Have the most godly and fruitful people suddenly left your church without giving you a reason? All these things have been ordained by your Father in heaven. Do not be surprised if you face hostility from unbelievers. This too, has been ordained by God and is under his good and wise sovereign control. Do you know why that happens—why that enmity exists between believers and unbelievers? Because God put it there. You see that in Genesis 3:15, “I will put enmity between your offspring and her offspring, between the offspring of the woman and the offspring of Satan.” Don’t we see that being played out in Scripture? Cain and Abel, Ishmael and Isaac, Jacob and Esau, children of light and children of darkness, sons of Abraham and sons of the devil, sheep and goats.

While creation itself groans under the weight of sin, we see in the Old Testament that God sends famines and earthquakes and floods to specifically judge sin. And that other times, we don’t know why they happen, other than the fact that our rebellion has brought a curse upon creation itself. And, this is why the earth that was first made hospitable to sustain human life now sometimes is inhospitable to its residents. We see that when natural disasters strike.

3. Suffering exists because of Satan. Satan is called “the god of this world”  in 2 Corinthians 4:4. Ephesians 2:2, calls him “the prince of the power of the air.” Ephesians 6:12 calls him “a cosmic power over this present darkness.” Satan opposes God’s purposes and God’s people. And from time to time, Scripture peels back the curtains as it were, and gives us a glimpse of unseen causes behind our sufferings. So take Job, for example. Satan unleashes havoc in Job’s life. And how does he do it? Well, we read that he did it through natural disasters, and sickness. We also see Satan inciting David to number his troops in 1 Chronicles 21:1. This is an act of sin for which David takes full responsibility and even gets punished for.

In the gospel narratives, we often see demons as being responsible for certain diseases that Jesus heals. Jesus himself sees his ministry of healing as an assault on Satan’s kingdom—something that the Old Testament prophets said would happen when the Messiah came. And so, when Jesus came on the scene and inaugurated his kingdom and his power broke through, all those prophets spoke about came to pass. Jesus’s healings are unique in that sense—he directly attacks the powers of darkness.

When Peter talks about the suffering of believers in 1 Peter 5:8, he cites Satan as being responsible for them, describing him as a roaring lion waiting to devour unbelievers. But remember this: Satan can only do what God his creator permits him to do. We know that because of the story of Job. Satan can only do what God permits him to do. God is sovereign, not Satan.

Now, you should know that false teachers, and false converts can be a source of great grief and can be a source of great suffering in the life of a pastor. In fact, you can see false converts and false teachers mentioned in almost every letter in the New Testament. And you remember what Paul says in 2 Corinthians 11:14-15, “even Satan disguises himself as an angel of light.” So it is no surprise if his servants also disguise themselves as servants of righteousness. They can appear as false converts, as divisive false teachers and yes, even public health officials, calling you to forsake the Lord’s commands, all with good intentions. See, Satan can only do what his creator permits him to do and we must do what God commands us to do.

This article is the second one of the five-part article series of the transcript of Session 3 preached by Brother Anand Samuel in the AIPC 2021 Online Conference held on Sep 17-19, 2021.
Please click here to view the sermon. 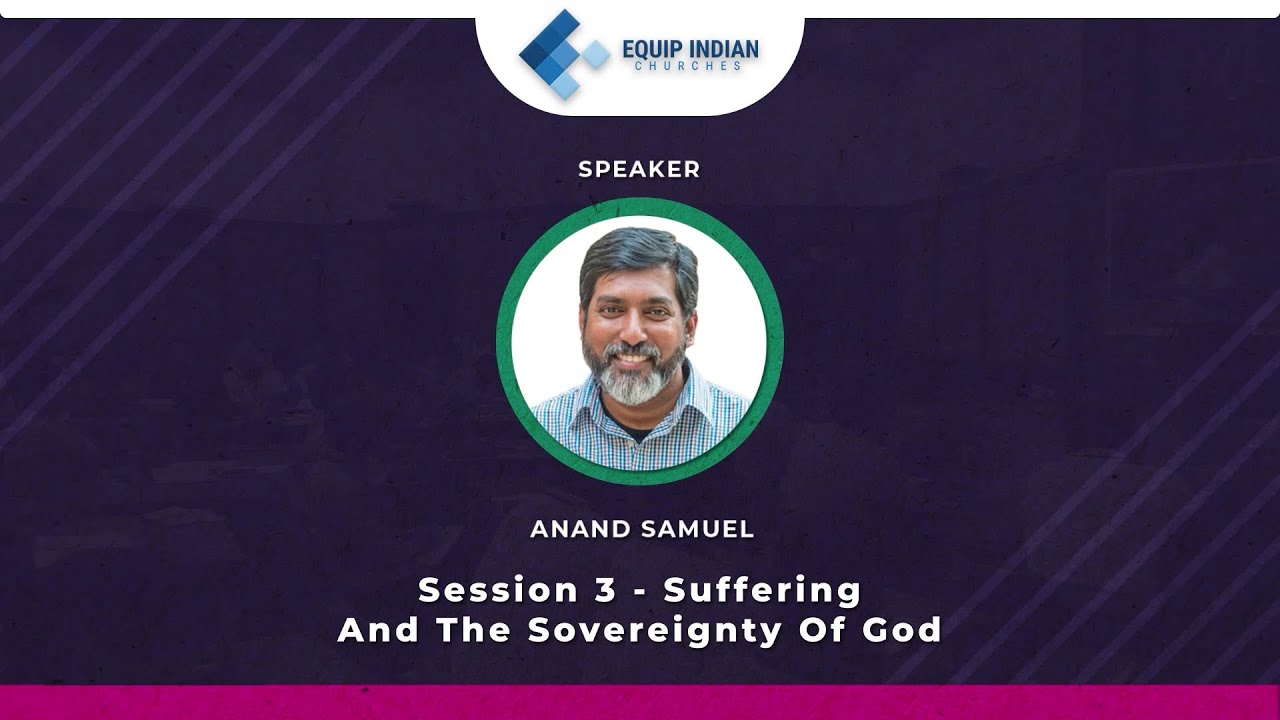 AIPC 2021 – Session 3: Suffering and the Sovereignty of God is the senior pastor of Grace Evangelical Church, Sharjah.

Suffering And The Sovereignty Of God – Part 5

Suffering And The Sovereignty Of God – Part 4

Suffering And The Sovereignty Of God – Part 3

Suffering And The Sovereignty Of God – Part 1

Suffering And The Sovereignty Of God – Part 2

Suffering And The Sovereignty Of God – Part 1