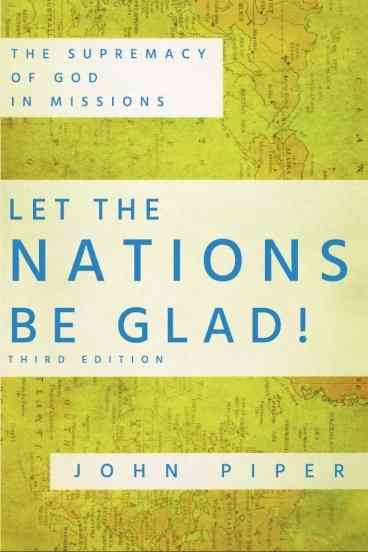 One of the main criteria for a book to qualify as a classic is that it must stand the test of time. John Piper’s book Let the Nations Be Glad has rightfully earned the status of being a classic on modern missions. It has stood the test of time by being a guide for missions for the past thirty years. God has used this book to propel His mission throughout the world for the sake of His name, as documented in a recent article. This book has a consistent theme to it, namely, the supremacy of God in Missions. God is infinitely passionate about His glory among the nations. Every chapter in this book will maintain this theme. In the introduction, Piper poses his thesis: “Worship is the fuel and goal of missions. That has been the signature thesis of the book since its first edition in 1993.” If God were treasured and worshipped as the highest treasure of man, then missions would have been unnecessary. And therefore, Piper notes that “missions exists because worship doesn’t.”

The book is divided into three parts consisting of seven chapters. Part 1 deals with the purpose, power, and price of missions. In chapter 1, Piper deals with the purpose of missions, which is worship. He explicates that missions exist because worship does not. He notes that one can’t commend what one does not cherish, and therefore, the fuel and goal of missions is worship. In chapter 2, Piper postulates the power of missions, namely prayer. Employing a rubric of war, he notes that prayer is primarily a walkie-talkie for missions as it advances against the powers of darkness and unbelief. He explains that the gospel will not be proclaimed in power without the prevailing, faith-filled prayers of God’s people. Chapter 3 describes the price of missions—suffering. He notes that loss and suffering, joyfully accepted for Christ shows the supremacy of God’s glory more clearly in the world than all worship and prayer.

Part 2 deals with the necessity and nature of the task of missions. In chapter 4, Piper deals with, “The Supremacy of Christ as the Conscious Focus on All Saving Faith.” This chapter poses the question of whether the supremacy of Christ means that He is the only way to salvation. Subservient to this main question are three more questions: Will Anyone Experience Eternal Conscious Torment under God’s Wrath? Is the Work of Christ Necessary? Is Conscious Faith in Christ Necessary? Biblical answers to these three questions are crucial because in each case a negative answer would seem to cut a nerve of urgency in the missionary cause. Piper enunciates that biblical evidence points to an affirmation of the aforementioned three questions. And therefore, the urgency for missions stays intact and the supremacy of Christ as the conscious focus of all saving faith is maintained. Chapter 5 deals with the definition of missions from a biblical standpoint. Piper defines “all nations” in Matt 28:19 as all people groups in the world as opposed to all individual Gentiles or countries. And what does it mean to be reached? Biblically speaking, Piper notes, a country can be said to be reached when the gospel is proclaimed in an understandable way (Matt 24:14, Mark 16:15), and has been responded to(Matt 28:19, Rev 5:9 and 7:9-10). Mission leaders define a people as reached when there is an indigenous church capable of evangelizing the group.

Part 3 deals with the practical outworking of compassion and worship. In chapter 6, Piper engages with Jonathan Edwards and explores the unity of motives in world missions. He posits that there is no conflict between a passion for God’s fame and compassion for His people. The aim of compassion is to rescue sinners from hell resulting in them getting saved by treasuring all that God is for them in Christ, it is one coherent goal. In the last chapter, Piper clarifies what he means by “worship.” By worship, he does not mean merely the gathering of Christians for corporate worship because such a definition would be too narrow for his main thesis. By worship, he means a radical simple and inward spiritual treasuring of the character and the ways of God in Christ, it is cherishing and being satisfied in Christ. With thousands of diverse people groups around the world, outward forms of worship may vary drastically, but the inner reality of treasuring Christ in spirit and truth is common ground.

I love this book for several reasons:

This book is highly recommended for church members, seminary students, pastors, and teachers. May the Lord Jesus, in His mercy, use this book to influence modern church missions for another 30 years.