Consider a king outnumbered and out-qualified, humiliated before his own people when the servants of the mighty king of Assyria called out to the inhabitants of Judah to not trust their own king. “Do not let Hezekiah deceive you” (2 Kgs. 18:29), “Do not let Hezekiah make you trust in the LORD” (vs. 30), “Do not listen to Hezekiah” (vs. 31), and “Do not listen to Hezekiah when he misleads you” (vs. 32)” were the repeated exhortations of this pagan king. “Make your peace with me and come out to me,” he said. O how the enemy of our souls makes the same advances today, and O how many Christians cave. But this king of Judah did not. The world at that time was dominated by the Assyrians and Judah did not have the strength to resist them by any measure. After taking over the northern kingdom of Israel, this powerful enemy now stood at the doors of Jerusalem, taunting the one king of Judah who was more trusting of God than any who sat on that throne – Hezekiah (vs. 5).

After a brief consultation with Isaiah, he received word from the Lord that he ought not to be afraid (2 Kgs. 19:6) and can trust in the Lord to rescue him. But Sennacherib (the king of Assyria) persisted and sent Hezekiah a letter saying, “Do not let your God in whom you trust deceive you” (vs. 10). From instilling fear and doubt in the people hoping to turn them against Hezekiah, he now does the same to Hezekiah in order to turn him away from God. Does this event not serve as a good parable to our own struggle with the allure of this world? A lot of things that Sennacherib pointed out were true. None of the so-called gods of the other nations could resist the might of Assyria (ch.18:34 & ch19:11-13). Not even the support of Egypt could resist their hand. And, in this miserable circumstance, we are given the sight (the front-row view) of what faithfulness and trust looks like in the life of the Christian.

Upon reading the letter from Sennacherib, Hezekiah calls for no counsel, prophecy or war plan. Armed with nothing more than God’s promise through Isaiah and the letter in his hand, he went up to the temple and prayed. O how robbed many of our churches have become today when we’ve replaced prayer with systems and programmes for every possible scenario. Let us then look back across the ages and see a king who did it right.

vs. 14 – He spread [the letter] before the LORD
Hezekiah brought his burdens and spread them before the LORD. All the taunts and allure, the mocking and ridicule, he brought before the only one who could slay his demons. Lead us not into temptation but deliver us from evil.

Vs. 15 – “O LORD, the God of Israel, enthroned above the cherubim, you are the God, you alone, of all the kingdoms of the earth; you have made heaven and earth.
Here was a man who knew his theology – his God. Regardless of how things appeared in this world, Hezekiah did not buy into the narrative. He understood the true state of affairs, that God sat enthroned above the cherubim. He alone was God and there was none like him. And he who made heaven and earth rule over all the kingdoms of the earth. And not only those kingdoms that fell to the Assyrian sword, but even the very kingdom of Assyria belonged to the One who sat enthroned. Sennacherib failed to recognise that God is God over Assyria as much as he is God over Israel.

Vs. 16 – Incline your ear, O LORD, and hear; open your eyes, O LORD, and see; and hear the words of Sennacherib, which he has sent to mock the living God.
Out of all the things that the king of Assyria said, look at the one thing that burdened Hezekiah, the one concern that he had. Not that Assyria was mightier, not that Judah didn’t have enough strength, not that Sennacherib embarrassed him before his own people, but that God was being mocked. Hezekiah had his priorities right, and his desire for the glory of his God far outweighed any desire he had for his own glory.

Vs. 17-18 – Truly, O LORD, the kings of Assyria have laid waste the nations and their lands and have cast their gods into the fire, for they were not gods, but the work of men’s hands, wood and stone. Therefore they were destroyed.
He had no confusion regarding the folly of all the other nations who worship gods that were no gods, just idols of a man carved by hands on wood and stone. Faced with a real threat, Hezekiah understood that the Assyrian army was a mighty army as Sennacherib claimed, but he also understood the folly of Sennacherib’s worldview. The other nations weren’t destroyed because their gods were weak, they were destroyed because they had no god. But Hezekiah served the living God. He refused to be deceived by the lies of the enemy.

vs. 19 – So now, O LORD our God, save us, please, from his hand, that all the kingdoms of the earth may know that you, O LORD, are God alone.”
Here is the king’s one request of God. Save us from Sennacherib for the sake of your glory O LORD. Between the godless generation that preceded and followed this king, Hezekiah understood that there was no virtue or merit by which he deserved to be saved, except the grace and glory of his God alone. He called upon God’s grace and mercy as a humble servant.

And God heard Hezekiah’s prayer and promised to defend this city to save it, for God’s own sake and for the sake of his servant David (v34). And that night the angel of the LORD went out and struck down 185,000 in the camp of the Assyrians. And when people arose early in the morning, behold, these were all dead bodies (v35). Sennacherib himself was later killed by his own sons. All the might of Assyria crumbled, and the tide had turned overnight.

We can learn much from Hezekiah’s prayer. A healthy prayer has a sound theology as its ground, the glory of God alone as its motive, and as our burdens exchanged for his peace. Do not be anxious about anything, but in everything by prayer and supplication with thanksgiving let your requests be made known to God. And the peace of God, which surpasses all understanding, will guard your hearts and your minds in Christ Jesus (Philippians 4:6-7).

There was a King further down the generations of the people of Israel. A king who was ridiculed before his own people, and his people did not remain silent but handed him over to the enemy. He was the King who prayed for God’s glory, not by means of his own rescue but by carrying out his Father’s will to crush him, for the sake of those who would believe in him. The same evil that was behind the Assyrian army had prevailed over the hearts of the men who cried out that day to have him crucified. He did not cry for his own rescue but for the rescue of those who would believe in him. He did not escape the gates of death but walked right through them. A moment in history when evil seemed to have entirely prevailed, was the moment in history when evil was defeated. Death could not keep him (Acts 2:24). From out of the grave he rose, breaking the curse of sin and death, resurrected and seated at the right hand of God, and now all authority in heaven and on earth has been given to this King, and his name is Jesus Christ. Therefore God has highly exalted him and bestowed on him the name that is above every name, so that at the name of Jesus every knee should bow, in heaven and on earth and under the earth, and every tongue confess that Jesus Christ is Lord, to the glory of God the Father (Philippians 2:9-11). Hezekiah’s prayer saved the people of Jerusalem, but Jesus’ prayer saves all who would believe in him. All honour and glory be to our Lord, God and Saviour, Jesus Christ! 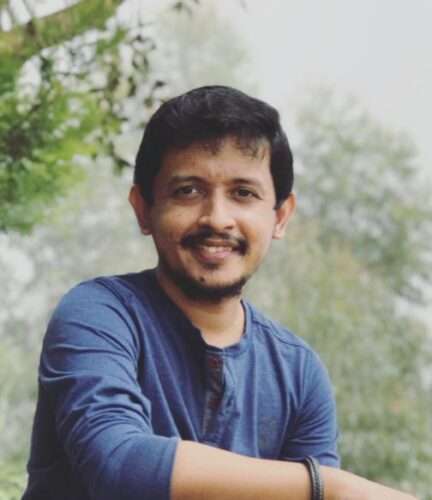 serves as the preaching pastor at Redemption Hill Church, Trivandrum, Kerala. He is married to Cinu and they have a son.

Why And How We Approach The Bible As God’s Word.