Was Jesus Afraid To Die On The Cross?

The wind was picking up now, blowing clouds across the moon, covering the garden in darkness. “Stay up with me?” Jesus asked his friends. They said yes and waited under the olive trees, but they were tired and soon they fell asleep. Jesus walked ahead alone, into the dark. He needed to talk to his heavenly Father. He knew it was time for him to die. They had planned it long ago, him and his Father. “Father…!” Jesus cried. “Is there any other way to get your children back?” But Jesus knew – there was no other way. Violent sobs shook Jesus’ whole body. Then Jesus, like a lamb, said, “Your will be done, not mine.”  The Gospel writers narrate this event so well that the readers would grasp the reality of Christ’s suffering and agony clearly (Matt. 26; Mk. 14; Lk. 22).

In the Garden of Gethsemane, when Jesus started to pray, we can clearly see he was sorrowful (Gk. lupeó) and troubled (Gk. adémoneó). The Greek word translated as troubled could also be translated as fear or lack of courage. Jesus says to his disciples that he was very sorrowful, even to death (Matt. 26:38). Luke adds that Jesus was in agony (Gk. agónia) as he prays (Lk. 22:44). It appears as if Jesus was afraid to approach the cross. He prays, “My Father, if it is possible, let this cup pass from me; nevertheless, not as I will, but as you will” (Matt. 26:39).

The cup that Jesus was pleading to pass from him was not referring to the pain of death or the manner of death. It alludes to the wrath of God that he would endure for us (Ps. 11:6, 75:8-9; Isa 51:17, 19, 22 ). He is distressed with the thought of alienation and separation from one to whom He is eternally linked as God of very God. He is troubled with the thought of having his absolute sinlessness scarred as He bears our sins upon Him. In the words of Ryle,

“The weight that pressed down our Lord’s soul, was not the fear of death, and its pains. Thousands have endured the most agonizing sufferings of body, and died without a groan, and so, no doubt, might our Lord. But the real weight that bowed down the heart of Jesus, was the weight of the sin of the world, which seems to have now pressed down upon Him with peculiar force. It was the burden of our guilt imputed to Him, which was now laid on Him, as on the head of the scapegoat.”1

In the Garden of Eden, the first Adam rejected the revealed will of God, broke the Law of God, and ate the forbidden fruit. Consequently, humanity was enslaved to sin and death (Gen. 3 and Rom. 5). In the Garden of Gethsemane, the Last Adam, Jesus Christ had a choice to make to obey God, which would bring salvation to His people. The struggle was real. The temptation was real. Jesus’ prayer manifests His true human nature. Although his divine nature knew that the cross was the only way to save his people, in his human nature He pleaded if there was any other way. Yet, he came out of this temptation triumphantly. Calvin rightly says,

“When Christ was distressed by grief and fear, he did not rise against God, but continued to be regulated by the true rule of moderation… Let us, therefore, attend to this distinction, that Christ, amidst fear and sadness, was weak without any taint of sin.”2

Christ’s submission was vindicated by God the Father by his resurrection from the dead and by declaring Him to be the Son of God (Rom. 1:4). Because of His obedience, He was given the name above every name, so that everyone would come under the His Lordship (Phil. 2:8-11). God wants us to take the same route – absolute dependence on Him through prayer, total submission to His will, and willingness to suffer for His glory. If Jesus Christ fell on his knees on the day of temptation, where then is our place? When he submitted totally to the will of God, we ought to. Since he suffered the cross, we carry our cross in the same route.

What a great sympathizer we have in Jesus! What a great friend we have in Him! He is a high priest who can sympathize with our weaknesses. He was tempted as we are, yet without sin (Heb. 4:15). When we are encircled by temptation, we seek God for help through Christ who hung on the cross. He is our sin-bearer. He is our hope. He is our deliverer. We can confidently draw near to the throne of grace, that we may receive mercy and find grace to help in time of need. Joseph Scriven narrates this dependence on our Lord in his hymn very well:

Can we find a friend so faithful
Who will all our sorrows share?
Jesus knows our every weakness,
Take it to the Lord in prayer.3

1  J. C. Ryle, Expository Thoughts on the Gospels. https://www.studylight.org/commentaries/eng/ryl/matthew-26.html
2  Calvin, Harmony of the Gospels, https://www.ccel.org/ccel/calvin/calcom33.ii.xxx.html
3  Joseph Scriven, What a friend we have in Jesus. https://www.hymnal.net/en/hymn/h/789 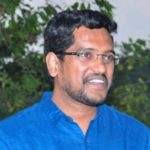 serves as the pastor of Trinity Bible Church, Vijaywada, Andhra Pradesh. He is married to Chrisma and they have a son

Persecution: How do we Prepare to Face the Challenge

How Can I Pray For People Whose Lives Are Not In A Crisis?

The Church: The Bride of Christ